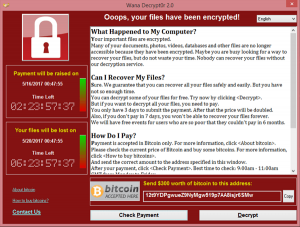 A non-targeted attack delivered via spam emails was used to spread the ransomware. The email contained a PDF attachment embedded with a malicious macro that encrypts the files of victims, rendering their system inaccessible unless a ransom in the range of hundreds of dollars is paid via bitcoin.

The attack specifically targeted Windows systems that hadn’t been updated with the latest Windows security patch from March 2017. This patch fixed the MS 17-010 vulnerabilities that WannaCry specifically exploits. Put simply, without the update your computer system was under threat. This is a situation one of our clients found themselves in.

An advantage of regular penetration testing is the ability to identify new threats to IT infrastructure. Security patches can often be overlooked due to server configuration and numbers of workstations leaving businesses vulnerable.

Fortunately, during a routine penetration test of our client’s IT infrastructure, we were able to exploit the MS 17-010 vulnerability and identify that the critical Windows update had been missed. We immediately notified our client, advising specific IP Addresses that were vulnerable, and gave recommendations to remove the threat to their business.

How to protect your infrastructure against WannaCry.

If you’re unsure if your business is at risk from WannaCry we recommend the following steps:

If you have any queries or concerns about this security threat, email us directly on sales@stickman.com.au, fill our contact form or call us on 1800 785 626.